One of the hardest choices to make, when I returned from Oaxaca and committed to making visual art, was to relinquish my familiars. I grew up with animals, as did all of my extended family. The stories of the quirks and exploits of our animal companions, old and new, were, and continue to be, a touchstone for the Murdochs when we gather. It’s our inevitable starting place.

In that world, sharing life with animals was a given. I didn’t know anyone who didn’t have dogs and/or cats, and one set of grandparents was still running a tiny ranch operation with cows and chickens and the occasional pig and horse or pony by the time I was born. Even in the city, my animal companions have been, without question, the most grounding and humanizing element in my life. I spent eighteen years with a truly extraordinary cat, Mamán, a fearless, funny gypsy with whom I shared a deep bond; she was legend to all who met her.

So to understand that I was going to be without a stable home, and that I was choosing not to return to intensive day-jobbing, thus would not have the budget to care for another life, was difficult. In the decade and a half since I made that decision, I have spent periods of time with friends, who have shared their familiars with me with great generosity. Some of them have become loves of my life.

Rabbit was one. He actually was my dear friend Stacey Gordon’s daughter’s cat, but he spent summers in Virginia City, Montana with Stace, while her daughter was in school. He was a monster 35 lbs when he arrived with his winter weight, and the vet was sure he had some native Arizona wildcat in him. He had a glorious profile with a jutting square chin, and he was as imperious and intimidating as he sounds. And, for whatever reason, he picked me. 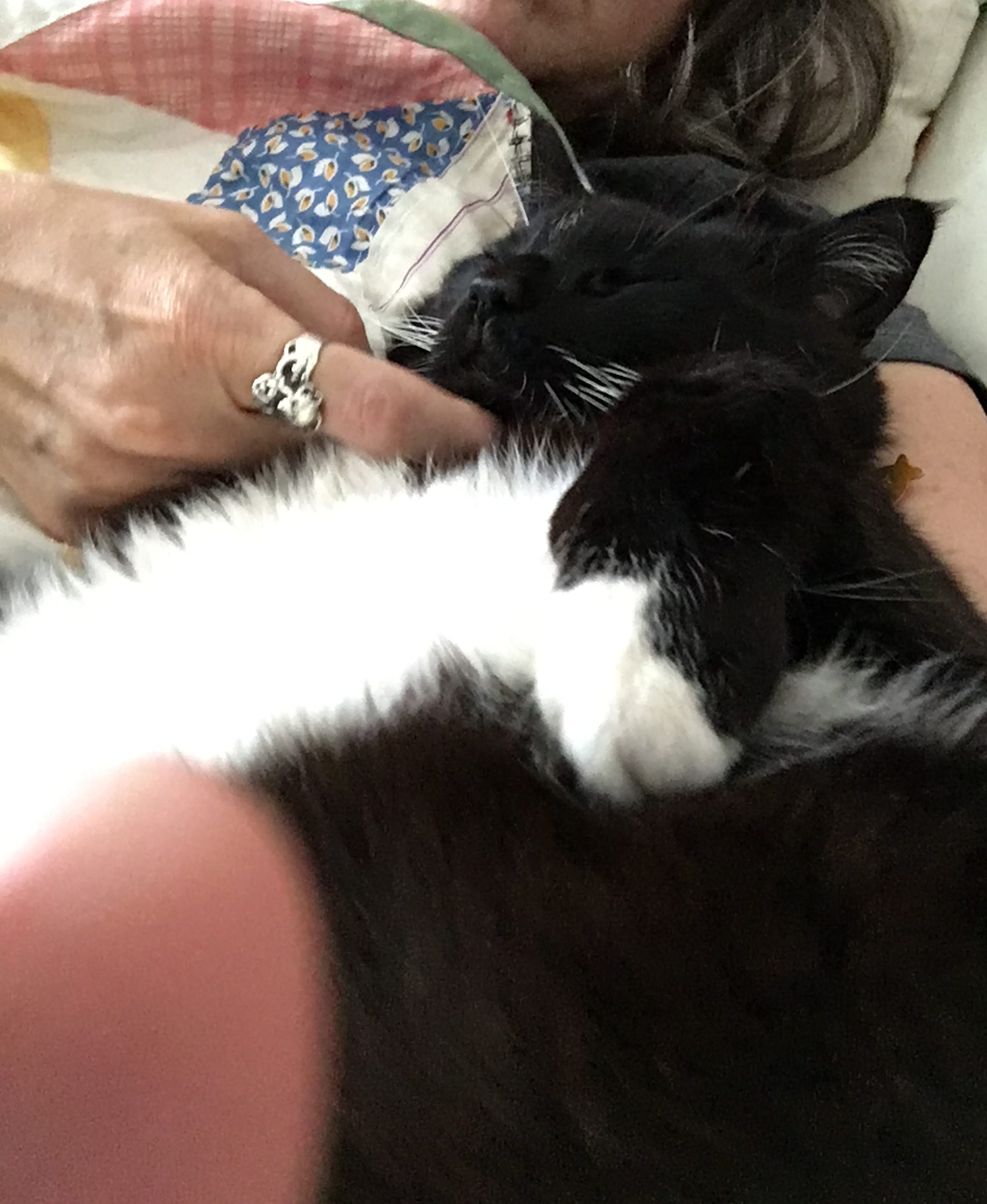 I was nervous about him at first, but he was so straightforward. He just pushed right in, put me where he wanted me to be, lifted his chin or offered his belly to be rubbed, and rumbled his happiness the second I got it right. During the day he would follow me around like a dog. Then he would disappear to hunt, intimidate the locals. Then back to me for a hit of love. At night he became my companion as well, often tucked into my armpit. He was—aside from the night I shifted him too much and he bit my trapped arm right down to the bone and sent me to the ER for a big dose of antibiotics—an ideal co-sleeper. Substantial, a solid presence, but surprisingly easy and malleable to the shifts of a night’s passage. Always affectionate.

Despite Rabbit’s heft and character, the surprise of the household was that Mimi, Stacey’s ancient Papillon, was the boss. She was, despite her little-dog yap, relatively calm by nature. She wrangled Rabbit and Yoshi, Stacey’s little Yorkie/Shitzu mix, with one snap, just one, and everyone stepped back to where she wanted them to be. The trio would wander in and out of my makeshift studio in Stacey’s cottage next to the house, almost always in tandem: a little line of animals, circling through, across the course of a day, according to a rhythm or drive or ritual known only to them. It made for a perfect kind of solitude, broken just enough.

In a shocking couple of weeks a short while back, they both died. First Rabbit, the great hunter himself, was taken down by a coyote back in Arizona. And a few weeks later, Mimi, who had been determinedly forging ahead in a deaf and blind old age, finally reached the end of her road. So, as we all mourn them, I made these memorials for Stacey and her daughter.

Rabbit was a grand figure to me, a bit mythical. Classically beautiful, masculine…and yet extreme, a bit overblown…a little comical and messy about the edges, like a Caravaggio drunk. He also had Caravaggio’s deep, portentous shadows and numinous lights. I made him the randy angel from Amor Victorious—the perfect doppelgänger for Rabbit: a sensualist and an imp, and a warrior…mostly of love.

I surrounded him with his friends, Yoshi, Ruby (my other great love from Montana), and Mimi as a ghost…the whole Montana gang. Whenever I was in my room working on my iPad or watching a movie, they would all gather on the bed together, jockeying for position, and talking to the world out the window beside it. (Except Ruby, who is blessed with a silent nature.) (Rabbit and Ruby always got pride of place). The photo of Rabbit’s face is from the last day I saw him, the kiss I gave him, the day I left for Seattle. Stacey caught that open look of love he would give me that just plain pulled my heart out of my chest. I returned it wholeheartedly.

This is the hard part of that generosity. That bond heals and nurtures me. And then I must leave it. We won’t have the pleasure and variety and responsibility of going on together. I accept it, anew, every time. But I mourn it, deeply, every time, as well. 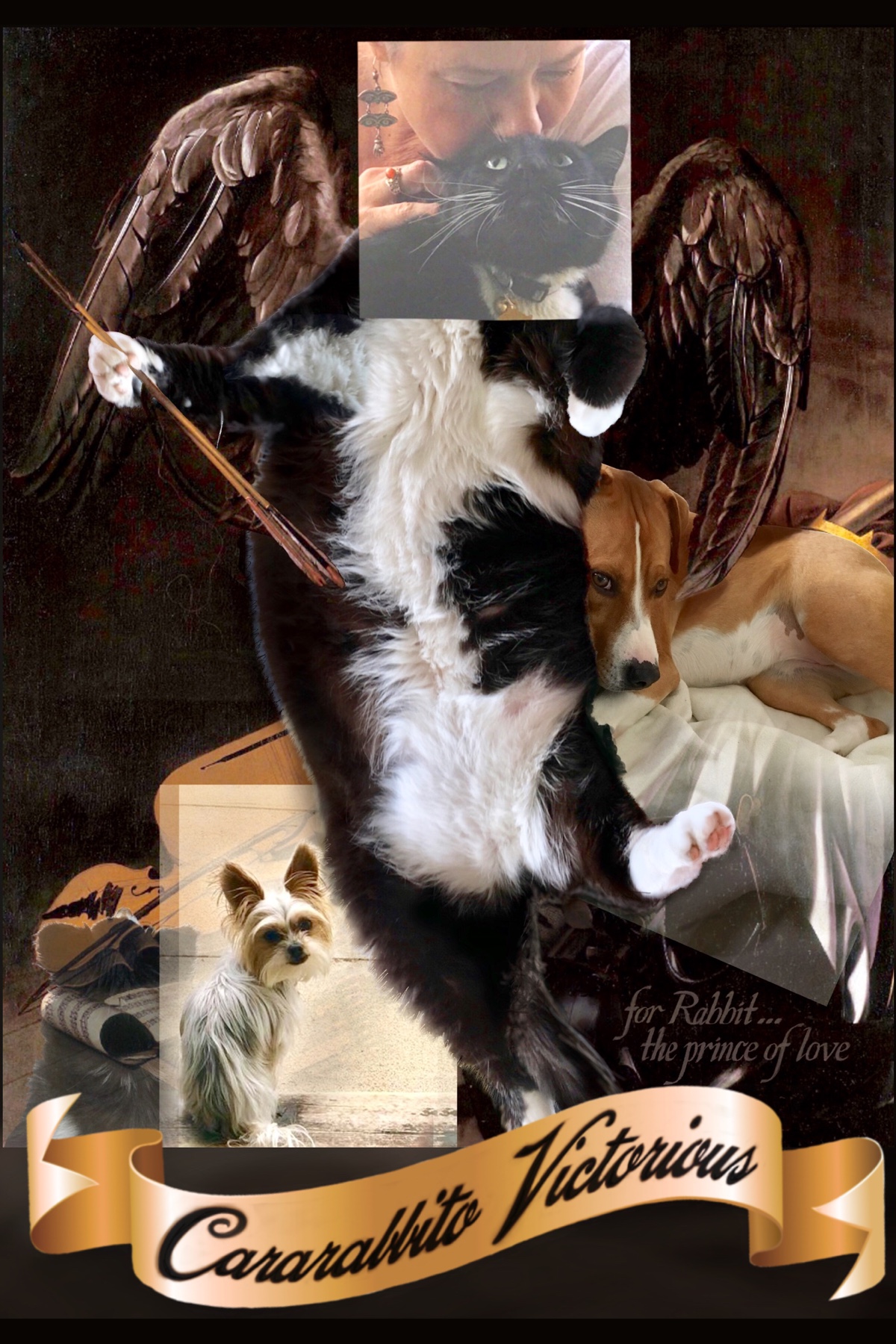 For Mimi, I wanted a regal persona. Stacey is a brilliant actress, director and singer, and Mimi frequently worked with her—and without her—on stage. She was calm, aware, and on cue; no fuss, no muss. I went looking for queens, and Catherine de Medici struck me as suitably self-possessed. When I found a portrait of her in a black and white ensemble, that sealed the deal.

Stace reminded me that the Papillon was the chosen breed of Marie Antoinette, but Mimi was in no way a tragic figure. She was a sprightly beauty, even as she became an elder. She couldn’t hear, or see more than, I’m guessing, shadows and light. And yet she would throw herself after you—literally—rather than be left behind. She would charge off the porch, or down the flight of steps, towards the front gate based only on the sensation of someone near. She would make periodic rounds of her kingdom—the house, the porch, the yard—and then, satisfied, lay down to nap. Or return to be gathered to Stacey’s bosom…or that of anyone else available. She would walk right up to you and stand, straight, four on the floor, demanding. If you didn’t respond quickly enough, she would do little faux-hops, as though she might jump into your lap. She couldn’t, despite her determination, but she would persist until you reached down and pulled her up.

Mimi was always present—and by that, I mean in the yoga/meditation sense—very present in herself and in the moment. She came to you with purpose. She wasn’t needy, more she was certain that you would be more comfortable with her there, that she was needed. Once ensconced in her chosen vantage point, she’d settle in and observe. Oversee. Like a queen whose subjects had no idea she was blind. 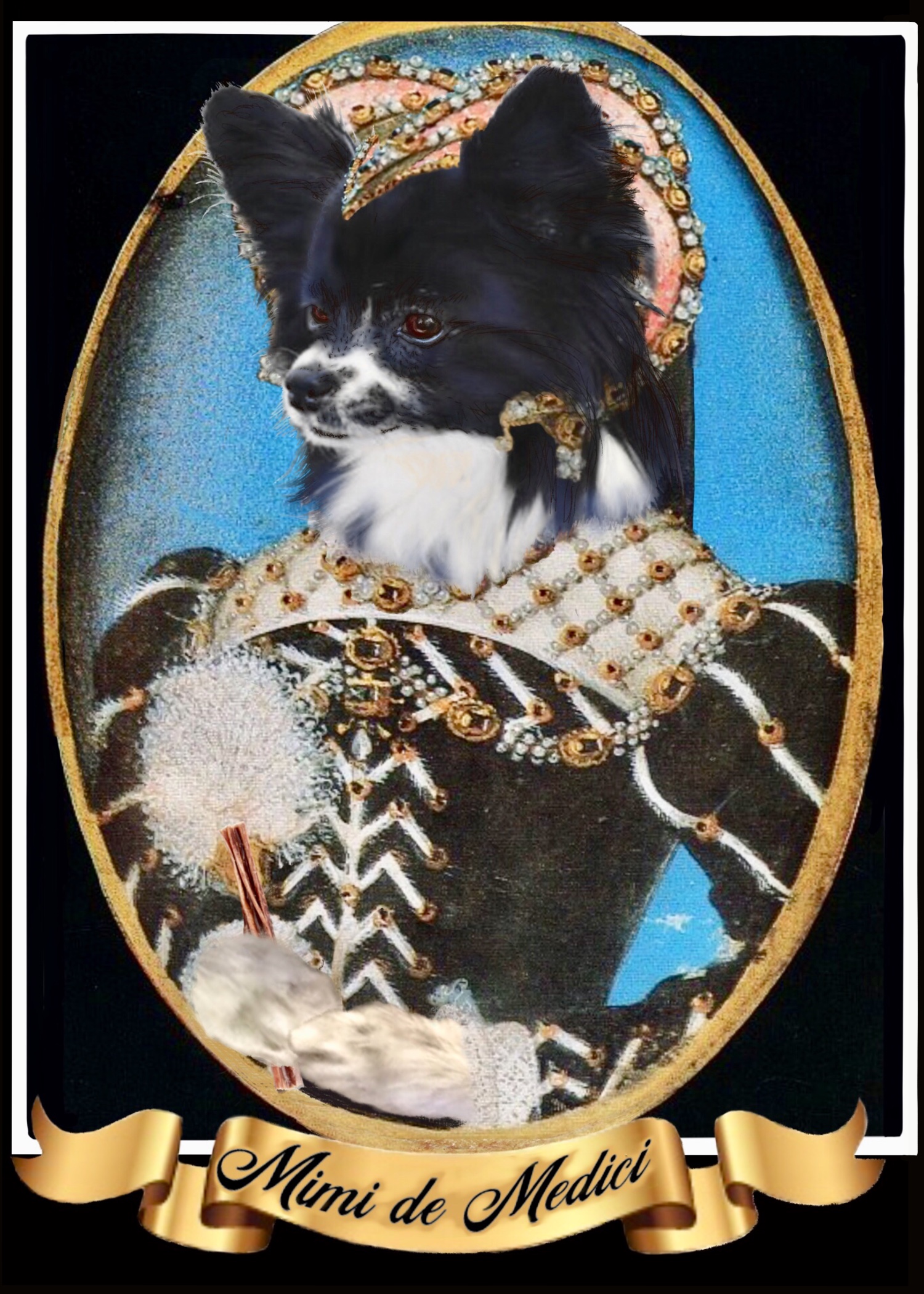 It was tough leaving them when I moved to Seattle in September of last year. It was even tougher to lose them a couple of months ago. But I am still grateful to Stacey and her daughter for giving me precious time with them. They burrowed deep into my heart and made a place there. Some form of loss comes with any form of love. So there we are. We honor it, and them. I made these memorials as a gift to Stacey and Taylor, to make a small, ongoing, physical place for Rabbit and Mimi. And to thank them all for their largesse in sharing their love with me.
These are my altars to Rabbit and Mimi.