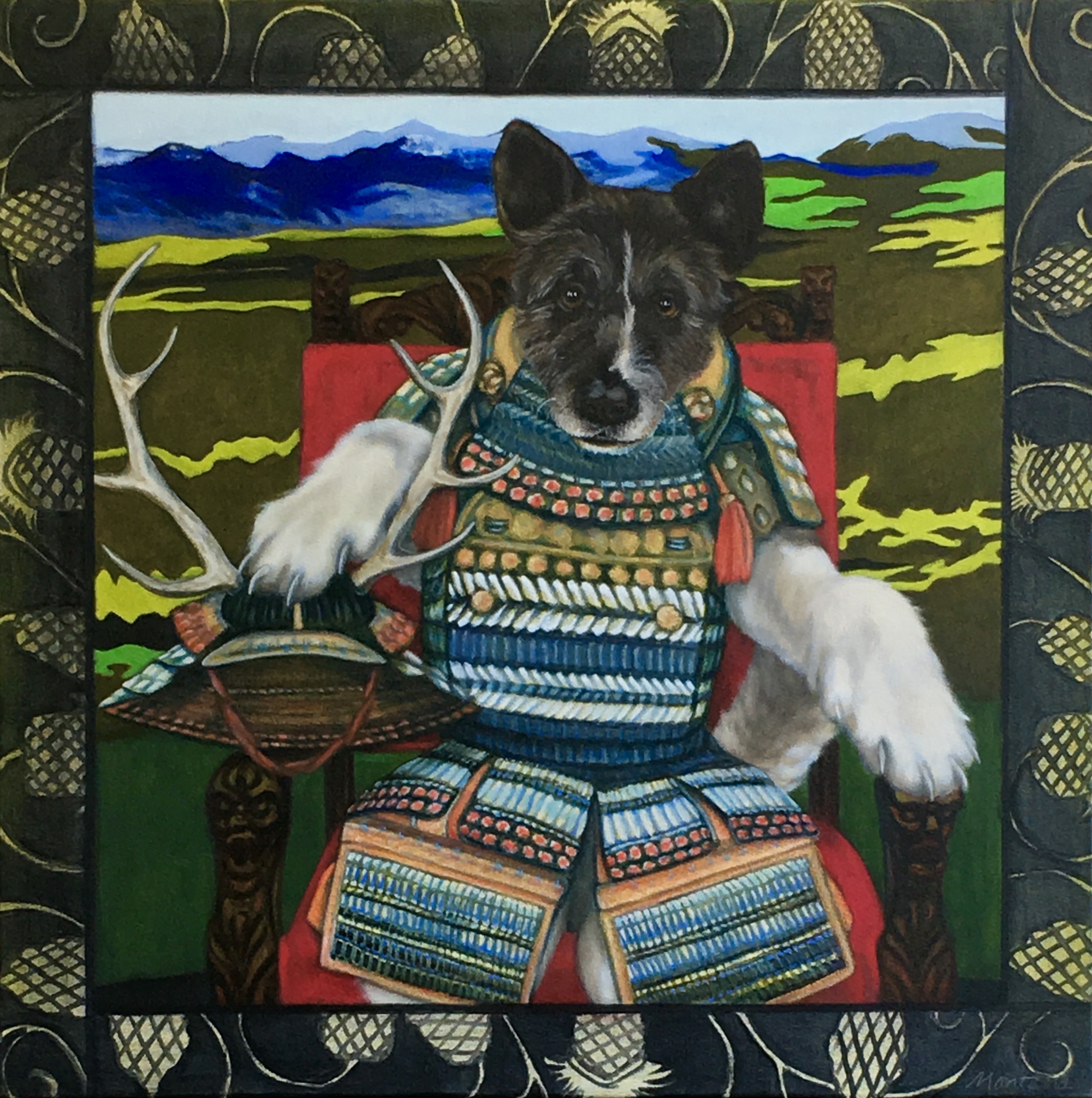 My summer in Virginia City took a near-immediate turn, when the man I was supposed to be house-sitting for changed his mind before he even left. He had apparently not taken seriously my two requirements for taking the job: use of a vehicle and in-home internet service. The day after I arrived, after trying to work with him to put these things in place, he told me neither was going to happen and gave me the boot. Luckily my friend Stacey and her husband literally rode to the rescue and offered me a room in their home and use of their cottage to paint, in exchange for house-cleaning.
But I still needed a vehicle to cover Part 2 of my Montana Plan: check out potential living/studio sites and art establishments to see if a fit for my type of art, and my type of budget, would be feasible here.
So I put out the word that I would paint a pet portrait in exchange for a car loan for the four months of my “residency.” Local rancher and all-around good guy Sam Maloney and his partner Jack, the town Librarian, took me up on the deal. Their beloved Akita, Shardik, had died this last year, and they wanted a memorial.
Back in May I sat down with Sam over drinks at the Wells Fargo Steakhouse and asked him about Shardik. The story was so rich, I went from thinking I’d do a modest head-shot to wanting to do a full-sized character portrait. The Akita was the warrior dog of the Japanese Samurai, and Sam’s mother, Rose, had specifically wanted that breed for protection. He was named for the giant, possibly divine, bear character in the Richard Adams fantasy novel of the same name; in part because the sheer mass of Shardik the Dog was impressive. But also because he had a compelling personality. Sam described him as having a great sense of humor, with a string of stories illustrating his delight in fun and trickery. Every photo of him caught the glint of mischief in his eyes.
I followed up with a visit to Sam’s, just to get a sense of the environment the portrait would live in, the colors favored, the artwork he, Jack and Rose gravitated towards…and got an unexpected tip. The family’s home is in the Ruby Valley, and Shardik’s favorite spot was on the deck outside the second-floor bedroom, gazing out over the valley.
So, with all of that in mind, I did some research. I came across a beautiful Japanese tapestry from the Edo period that stylistically flattened the landscape, and used a very constrained palette. I decided to apply that treatment to Shardik’s Ruby Valley vista. I borrowed a bit from its color scheme for my landscape, and from its woven edges, to create the border of the piece. My border was sans gilt, however. While Shardik was clearly a grand soul, he also seemed like a very grounded one. I always like to leave some portion of a painting that reveals its bones, evidence of how it was made, and the border serves that role in this piece.
I chose a model for a Samurai suit, honestly, because it shared color patterns related to those in rugs I was drawn to in the family’s home. But I did want to marry imagery from Shardik’s Japanese lineage with that of his Montana home. So I took inspiration from the helmet of a unique Daimyo Antler Samurai Suit, adding stag horns to locate his armor here in Montana.
Looking for a seat worthy of a warrior dog, I came across the dragon and lion thrones of various Asian dynasties. I knew I wanted a strong ground of saturated vermillion to surround Shardik, but didn’t want to go as far as a throne. In the course of searching–as is the way of the internet–some unrepeatable series of clicks led me to the imagery of the guardian lion-dogs of Chinese, Korean and eventually Japanese tradition, and, borrowing from that imagery, I found my way to the perfect thing: the lion-head chair. I loved the mythology of the open mouth of the lion-dog eating evil and badness, thus cleansing the sacred space s/he guarded. That seemed to capture the spirit of Shardik, and his role in his family.
So that’s it: the elements that came together to make my Shardik. Sam & Rose & Jack’s Shardik. It was a lovely way to spend a little over a month, precious to have a peaceful place all my own to think it through, map it out, locate my instinct, and then paint, just paint.

(With deepest gratitude to Staceybelle. Love you long time.)